Today is Qingming Festival in China

Today, April 5, celebrates Qingming Festival in China. It is also known as the Remembrance of Ancestors Day or Grave-Sweeping Day. Ancestor veneration is extremely important in Chinese culture, and the spirit of this day is much like Memorial Day in the United States, or Dia de Muertos in Mexico.

The Qingming Festival has been observed by the Chinese for over 2500 years. 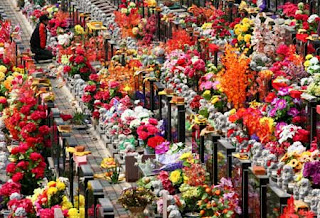