Why Should My Child Learn French?

French is not dying out! The majority of French speakers today are not living in France, and some key areas in which French is spoken, chiefly African countries, are poised to gain importance on the world stage. In fact, after English, French is the most-learned language worldwide. This means that there are huge communities available to the French learner.

It also means that by your child learning French you’re opening the door to communicate not just with native French speakers, but other people who have studied French. This can especially come in handy when traveling.

Children are natural learners, and language is no exception. The earlier a child learns a second language, the easier it will be and the more vocabulary he or she will retain into adulthood. Don't miss out on this crucial skill that will benefit your child in the future! Here at Cultured Kids Club, we are dedicated to growing multilingual children; we offer Spanish, Chinese, and French language lessons for kids. We've already discussed the advantages of learning Chinese and Spanish, so why not give French a try? Here are some reasons you should learn French as a second language.

Learning one language is not enough


In today’s world, speaking only one language is not enough. Students who speak several languages will increase their chances of finding a job, whether at home or abroad. Learning another language enriches the mind and opens up new horizons, both personal and professional.

The ability to speak both French and English is an advantage for finding a job. Many multinational companies use French as their working language, in a wide range of sectors from retail, automotive, luxury goods, and aeronautics. France, as the world’s fifth biggest economy, attracts entrepreneurs, researchers from all backgrounds.

For an English speaker, French has a great difficulty-to-benefit ratio. Although Spanish has become more frequently taught in the United States for quite some time now, there is one thing to keep in mind:

Taking the less popular option will make your skills more valuable when someone really needs them.

It is Fun to Learn


Contrary to popular belief, French is not a difficult language to learn. Pronunciation may seem daunting, but the earlier a child is exposed to a different language, the easier it will be for him or her to pick it up. It will not take long to reach a level where your child can communicate in French. French also appeals to students because it is a soft, melodious, romantic language.

If you want your child to learn both French and Spanish, you might want to consider starting French first. While French will likely be more intimidating to speak initially, its shared vocabulary with English will help lessen the difficulty of memorization. Then, the similarities in grammar between French and Spanish make it easier to move from one to the other.

French is also a great confidence builder as a gateway to more challenging languages; especially the Romance Languages (Spanish, Italian, Portuguese and Romanian) and even English, since over half of modern-day English vocabulary is derived from French.


Speaking French opens up opportunities for higher education at some of France’s best-known universities (the Sorbonne, Pierre Marie Curie University, etc.). Students with good French fluency may be eligible to apply for a French government grant to enroll on a postgraduate course of their choice in France, leading to an internationally recognized postgraduate degree.

Some 310,000 pupils are enrolled at 481 French schools in 133 countries. Half of them are foreign nationals, which makes the network of international French schools truly unique.

It is easy for students to make contact with French speakers of their own age, as pen pals or via the Internet. There are many different exchange programs in France that offer rewarding experiences. Thousands of French schools are twinned with counterparts around the world, creating links with the world’s largest educational network.


France is the world’s top tourist destination and attracts more than 79.5 million visitors a year. According to the World Tourism Organization, France attracted 83 million foreign tourists in 2012, making it the most popular tourist destination in the world. A honeymoon is Paris seems to be the number one dream for young married couples. The ability to speak even a little French makes it so much more enjoyable to visit Paris and all the regions of France. French also comes in handy when travelling to Africa, Switzerland, Canada, Monaco, the Seychelles and other places.


More than 220 million people speak French on all continents. French is a major language of international communication. It is the second most widely learned language after English and the sixth most widely spoken language in the world. French is also the second most widely taught language after English, and is taught on every continent. The OIF, an international organisation of French-speaking countries, is made up of 77 member states and governments. France also operates the biggest international network of cultural institutes, which run French-language course for close on a million learners. If you already speak English and add French to your repertoire, you might be surprised how many people you can talk to, even in countries where neither English nor French is an official language.

Whatever your goals, if you want your child to get started learning French, nothing should stop you now. Be sure to check out Cultured Kids Club's French class offerings; we make learning fun for children! 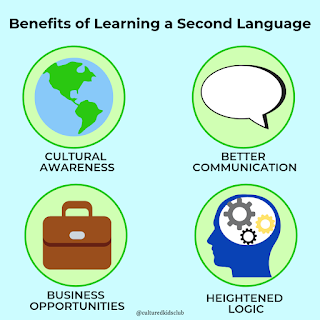 Posted by Cultured Kids Club at 9:00 AM