Why Should My Child Learn Spanish?

Why should your child learn to speak Spanish? Approximately 13% of the United States' population can speak Spanish; that's 44 million people. That's the second most-spoken language in the United States! Mexico and South America are our closest neighbors, and almost all of those are Spanish-speaking countries. With more than 400 millions speakers worldwide, Spanish is a fast-growing language. Becoming bilingual is not just a perk; it is a necessity.

Luckily, Cultured Kids Club does offer Spanish classes for children as young as 18 months! Keep reading to discover some of the perks of learning Spanish from a young age.


Take advantage of the critical time in early development when acquiring language skills comes naturally and easily. A child’s capacity to pronounce unfamiliar, foreign sounds and to absorb new grammar rules is highly enhanced prior to age six.

Children who start learning at a younger age have a better chance of developing a natural-sounding accent, something older kids have a hard time with if they learn later. Learning another language can also help with listening skills. A study at Northwestern University showed that people who knew a second language could better identify another speaker's voice among distracting noises. Most importantly, kids will develop a broader perspective of the world.


You can travel to a Spanish-speaking country and really get to know the culture. Spanish is the official language of 21 countries worldwide, and those countries are home to many exquisite and fun travel destinations. If you speak Spanish, you can stray from the tourist path and explore local culture with ease. Travel stress is also minimized when you understand directions and menus, and countless doors open to travelers who speak the native language of the country they’re visiting. Prepare your child for aventuras!

Give your child access to Spanish films, music, and literature. World-renowned singers like Juanes and Gloria Estefan, filmmakers such as Pedro Almodovar, and writers like Gabriel Garcia Marquez are all native Spanish speakers. Knowing Spanish will help your child understand and appreciate other cultures and Hispanic cultural contributions. Your child's ability to understand Spanish will enable him or her to gain important insights which monolinguals cannot.

It’s easier than you think.


Hundreds of words are the same in both English and Spanish. Animal, hospital, actor, color and doctor mean the same things in English and Spanish; they’re just pronounced a little differently. For English-speaking children, there’s no easier second language to learn than Spanish.

You might think that it would be difficult to learn a second language due to different sounds and the rate at which native speakers talk. This is why we at Cultured Kids Club teach immersion classes! This kind of learning enables your child to pick up on the rhythms and accents of Spanish while their ear adapts to the sounds of an entirely different language.


Your child can learn Spanish with us here at Cultured Kids Club. With our engaging and age-appropriate curriculum, kids will have so much fun, they won’t even realize they’re learning! Click here to learn more about our awesome program. 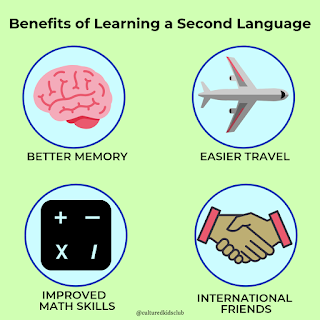